Splash and Burn is an awareness campaign responding creatively to unregulated farming practices of palm oil in Indonesia.

Murals, sculptures and interventions have been appearing throughout cities and the vast natural landscape of the Indonesian island of Sumatra. The street and public art is drawing awareness to deforestation, the displacement of wildlife, and other issues connected to the palm oil industry – with the aim of showing people the truth of what’s really going on and to instigate dialogue.

The artworks include a figure of a grey-suited, white businessman laying in a hammock, where only two trees stand, showing the exploitation of the Indonesian rainforest. Another shows random limbs protruding from palm oil fruits which lay on the ground.

The project, known as Splash and Burn, is a play on “slash and burn”, the term used to describe the cheap method used by smallholder farmers to clear land for palm oil plantations. Slash and burn methods often cause forest fires, creating a haze that affects the entire region.

Indonesia is the world’s largest producer of palm oil. Over the last two decades, indigenous communities have seen the government hand their land over to private companies, so they can produce palm oil.

It is the need for truth about the palm oil industry – to show people the truth about the industry itself, political and industry corruption, and smallholder farmers – that inspired Lithuanian artist, Ernest Zacharevic, to create the Splash and Burn project. 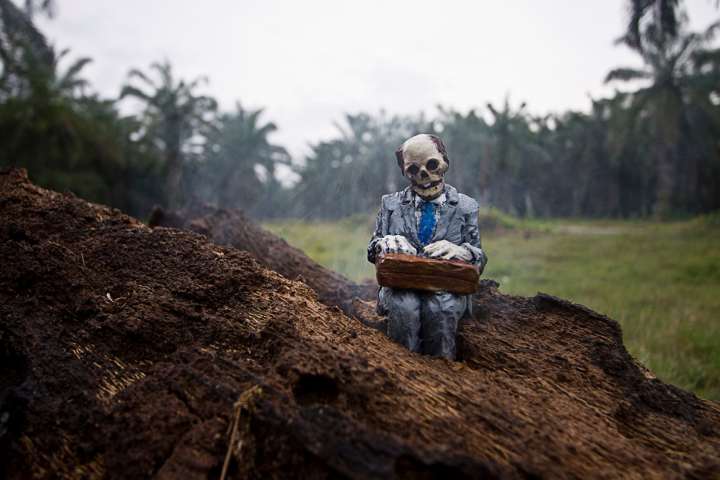 Over the last year, the Malaysia-based artist has brought together a group of international artists in a collective, artistic response to the global palm oil industry.

To raise money for the Splash and Burn project, Ernest Zacharevic sold 130 lithographs featuring a young boy wielding a burning match as he sits astride a rhino folded from a US dollar bill. 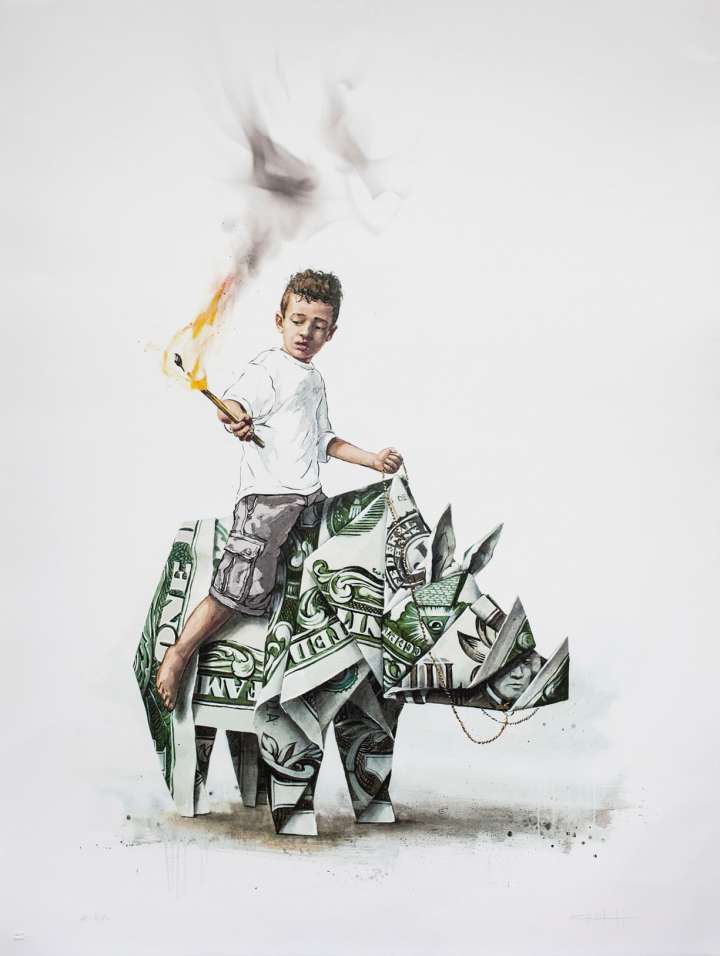 The artist has used the portrayal of children throughout his Splash and Burn artworks. One mural, which features children and an orangutan on a rickshaw, was painted around an existing sign that said dilarang masuk, meaning “no entry”. The children, according to artist Ernest Zachareciv, are a slightly cheeky symbol of surpassing taboo.

Each work in the Splash and Burn series was designed to highlight unregulated farming practices in the palm oil industry. Collaborators included the Sumatran Orangutan Society, a charity based in Oxfordshire, the Orangutan Information Centre in Indonesia, and a number of local NGOs.

Since February, international artists have been generously donating their time and creativity to the cause, curated by Ernest Zacharevic and coordinated by Charlotte Pyatt, arriving in secret to execute works. Among the artists involved include Anders Gjennestad aka Strøk, Axel Void, Bibichun, Gabriel Pitcher, Isaac Cordal, Mark Jenkins and Pixel Pancho.

On his website, Ernest Zacharevic wrote: “Conflict palm oil is a longstanding controversial issue that receives much media attention in peak moments of crisis, but very little in the months between the burning seasons. With global consumption increasing beyond the need to conserve our impact on our environment and communities, [Splash and Burn] aims to introduce a new perspective to the conversation on Palm Oil.

“Using art as a tool, suggests bridging the gap between the corruption surrounding the industry and the wider consciousness of the global consumer. Through a number of unique art projects Splash and Burn offers a creative platform for Organisations and NGOs fighting for positive change.”

Splash and Burn is an ongoing independent initiative. To support the activity, visit the Splash and Burn site where you can donate funds to the Sumatran Orangutan Society.

Rosa Medea is Life & Soul Magazine’s Chief. She is a writer who specialises in sustainable lifestyle and living, wellbeing, and entertainments. Rosa also works as a psychic, counsellor, intuitive reader and spiritual life coach helping people to become who they truly are and manifest their heart & soul’s desires into their lives: www.rosalindmedea.com