If watching Scandi noir boxsets has left you marvelling over the stunning and unspoilt nature of Scandinavian country, then perhaps a trip to that part of the world may make its way on to or further up on your travel to do list.

Scandinavia has been leading on sustainability for some years now, and sustainability is ingrained in the practices of many businesses. Many of the hotels, both in cities and throughout the country, operate on the principles of sustainability and will tick many boxes for green-minded travellers. 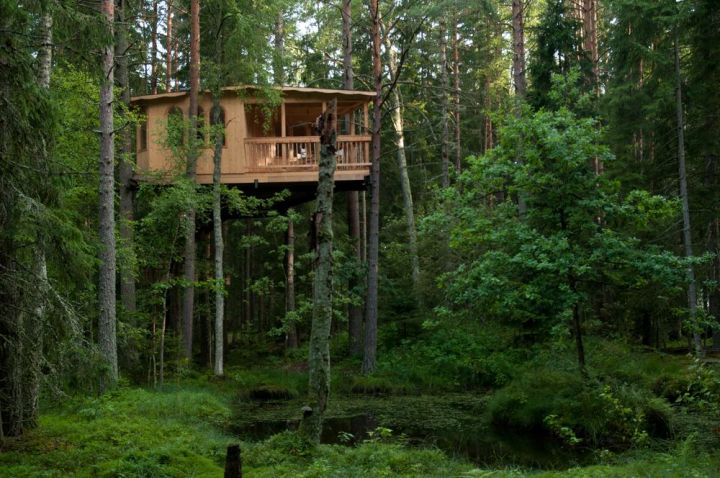 To experience the real splendour of Scandinavia is to experience nature in its rawest form. Sweden’s Urnatur eco lodge, situated in the Holaved Forest in the south of Sweden, caters to that in every aspect.

A three-hour car journey from Stockholm and Malmö, Urnatur is home to a fairy tale-like landscape – think hand built huts and tree houses amidst a string of small nature reserves. Completely off-grid, Urnatur eco lodge, which is open from May through to September, offers a unique experience where guests are encouraged to embrace simplicity and connect to nature.

Urnatur was founded by forester Håkan Strotz and biologist and designer Ulrika Krynitz. In 1993, the pair bought the small farm Sjögetorp, which later became home to the wood hermitage that is Urnatur’s accommodation collection of treehouses and cabins, all of which which were designed and built by Håkan Strotz himself.

Ten years later the pair felled the first tree of what was to become the main cabin. Most other houses were built from storm-felled trees that were lumbered on the farm using a mobile mill. In 2007, Håkan Strotz and Ulrika Krynitz opened the doors to the wood hermitage.

Each of the portfolio of cabins and treehouses carry their own unique essence – from the Hat Cabin, a six-cornered bole house with a copper roof; the traditional Forest Cabin; to the romantic treehouse, The Air Castle, which includes an ascent of a spiral staircase, ladder and suspension bridge to get to the cosy dwellings which has just enough room for a double bed.

Built in harmony with nature, around 90% of the energy used at Urnatur’s wood hermitage is from solar energy and wood.

Håkan Strotz and Ulrika Krynitz  say: “The place in itself is a vision that has come true: the ultimate place for relaxation and reflection, but also a meeting place where friends can gather, revisiting memories and giving birth to new thoughts and ideas.

“If it gets cold in the cottage, you light the fire in the stove, when it gets dark, you light candles & lantern.”