Witchy is a ongoing web-based comic that goes a long way to banishing all stereotypes about witches and the craft.

Developed by animation student, Ariel Ries, Witchy centres around the comic’s heroine, Nyneve, living in the kingdom of Hyalin, where the strength of your magic is determined by the length of your hair. 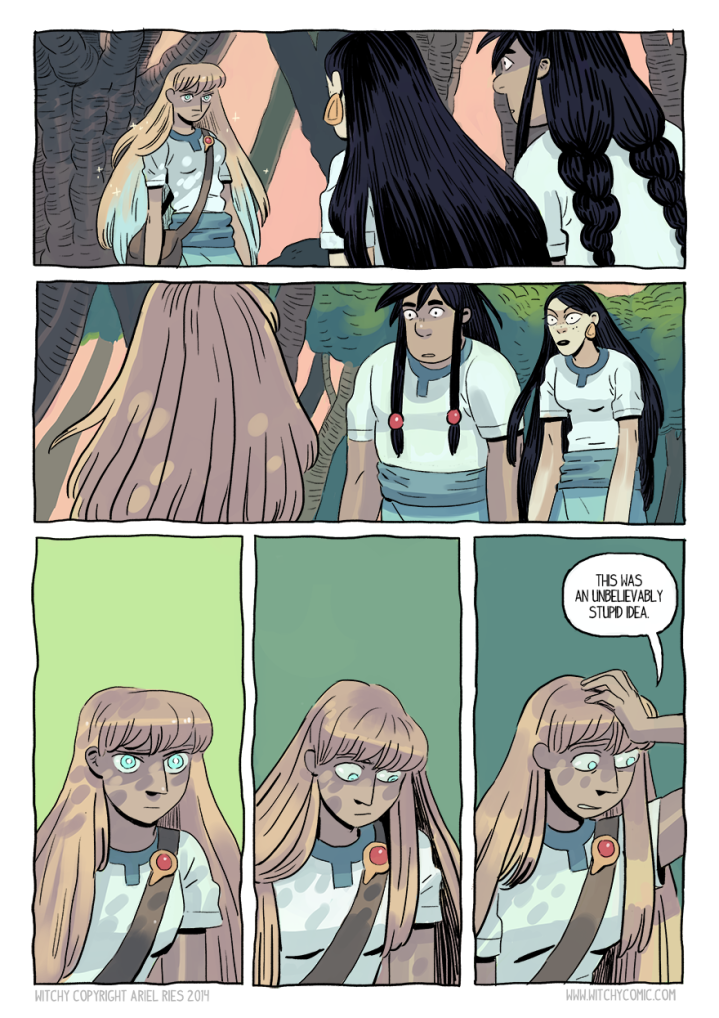 Since the kingdom of Hyalin is under a military regime, short haired people are looked down on, and those with hair that is considered too long are considered dangerous and are put to death. Powerful enough witches are conscripted into the Witch Guard, who serve as soldiers during war and peacekeepers in peacetime.

Her father having been sentenced to death for having very long hair, Nyneve wants nothing more than to keep a low profile and live a quiet life. But Nyneve is bullied by her classmates and singled-out for having short hair and “lacklustre” magic ability. But that’s simply a facade, as the truth of the matter is that her hair is actually so long.

When conscription rolls around, Nyneve has a choice to make – join the institution complicit in her father’s death, or stand up for her ideals.

A stunning web-comic with beautiful artwork and strong characters, Ariel Ries has essentially created a comic for people of colour, especially women, and celebrates difference. Ariel Ries’s characters are a diverse bunch – with Nyneve being Afghan/Indian; Prill, the star pupil of Nyneve’s school who initially bullies Nyneve before becoming her ally, being a transgender girl of Chinese and some Southeast Asian descent; and Batu being Mongolian and Tibetan.

As Ariel Ries describes: “It takes place in a melting pot fantasy world influenced by cultures spanning continental Asia, where everyone’s Asian and no one is straight.”

Ariel Ries has been making Witchy since 2014, which she started shortly before beginning her studies in animation. The animator, who recently completed 300 pages of the Witchy webcomic, makes updates to Witchy twice a week.

In addition to Witchy, Ariel Ries is currently developing a comic under the working title Strange Bedfellows, about “a guy who develops the power to physically manifest his dreams in real life — including that childhood crush he can’t seem to forget”. She is hoping to launch it.

Witchy is available to read online at the Witchycomic website. If you are a fan of Ariel Ries’s comic and artwork, you can offer gratitude by supporting her via Patreon and making a donation.