Honey bees are oval shaped, typically about 1.5 cm long and are usually light brown in color with yellow and brown bands around their bodies. Though honey bee appearance does differ from species to species – most honey bees will have dark to light patterns on their body.

The light and dark stripes on honey bees pose as more than just a colorful addition – these stripes are actually used for survival. The bright colors warn other predators of the honey bee’s ability to sting.

A bumble bee is typically larger and rounder than a honeybee, and is fuzzy too. 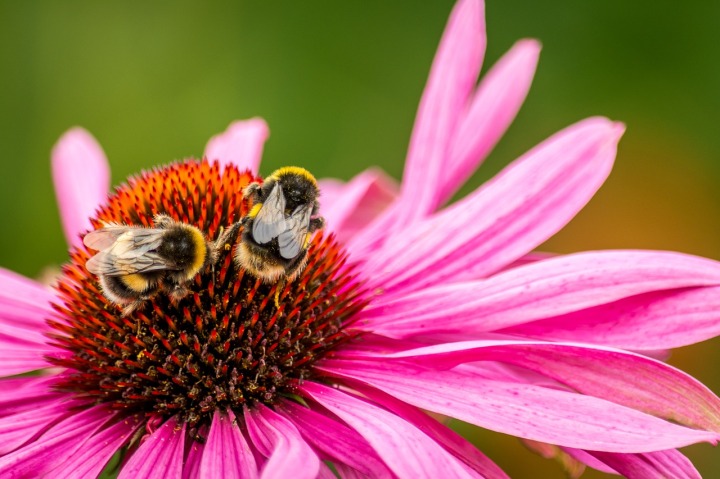 Role in the ecosystem:

Honey bees build their hives in hollow trees or on roof spaces. Honey bees also live in hives managed by beekeepers. Honey bee colonies can reach numbers in the thousands.

Like honey bees, bumble bees are social insects that live in colonies. These are usually located underground, particularly in abandoned holes, and overground in empty bird’s nests. Bumble bees tend to live in smaller colonies than honey bees. Bumble bee nests contain between 50 and 500 individuals.

Bees are programmed to protect their hive at all costs. Honey bees are non-aggressive by nature and typically only sting if threatened or provoked, as once they sting they die.

Like honey bees, bumble bees are non-aggressive by nature and will only sting if they feel they under threat or are being provoked. However they differ from honey bees in that bumble bees can sting multiple times without dying.

Wasps have a thin body shape with little or no hair. Some are microscopic whereas others can grow to be centimetres long. Their colour is typically bright yellow and black.

Role in the ecosystem:

Wasps do not pollinate. Wasps do eat harmful pests, however they do not discriminate and they eat just as many pests that are a valuable part of the ecosystem for the greater good as they do the harmful ones, so wasps role in the ecosystem is questionable.

Wasps live in colonies, building paper nests in disused animal burrows or in cavities in trees or buildings.

Wasps are predatory by nature and are aggressive. Wasps are found outdoors around food and drink. They will readily sting and can sting multiple times without dying.