Italian architect Stefano Boeri most certainly knows the importance of trees to the environment and the need for them in cities, which is why he created Vertical Forests.

Vertical Forest is a model for a sustainable residential building incorporating more trees and plant life as part of its exterior, which assists in absorbing carbon dioxide and in producing more oxygen.

The first Vertical Forest of its kind was constructed in the centre of Milan in 2014. Known as Bosco Verticale, it consists of two residential towers of 110m and 76m height, which hosts 800 trees, 4,500 shrubs and 15,000 plants from a wide range of shrubs and floral plants distributed according to the sun exposure of the facade. On flat land, each Vertical Forest equals, in amount of trees, an area of 20,000 square meters of forest. 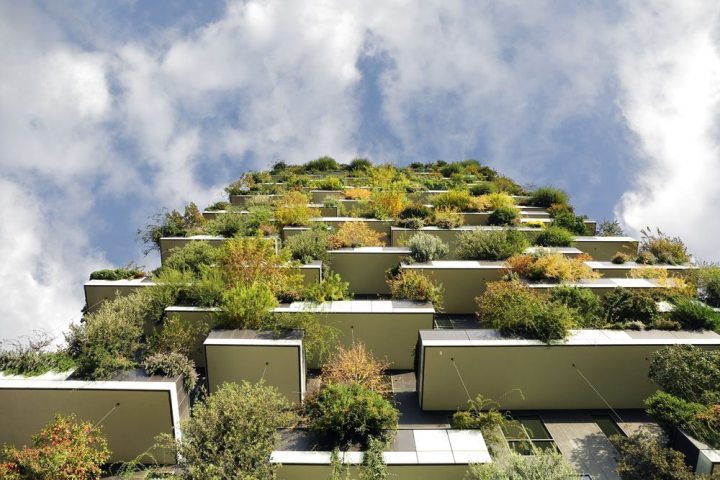 Trees are the cheapest and most efficient way to absorb carbon dioxide. The 20,000 trees and plants across this pair of towers can transform approximately 44,000 pounds of carbon dioxide into oxygen each year. According to Stefano Boeri’s studio, the trees and plants also decrease the average air temperature, create noise barriers and boost biodiversity by creating a habitat for birds, insects and small animals.

Creating the building was logistically challenging because they had to devise ways to securely plant trees and find species that would survive the increased wind speed. Arborists ascend the building in order to check the planting and prune when required.

Equipped with solar panels, geothermal heating and a grey-water system that irrigates the greenery, the Vertical Forest in Milan is self-sufficient.

Stefano Boeri’s idea is that by building skyscrapers that are covered in plants it will help absorb more of the pollutants and carbon dioxide in the air. The Vertical Forest contributes to the construction of a microclimate, produces humidity, absorbs CO2 and dust particles and produces oxygen. This in turn improves air quality and releases more oxygen into the atmosphere due to photosynthesis.

New Vertical Forest buildings are currently being constructed in European cities including Treviso in Italy, Lausanne in Switzerland and Utrecht in the Netherlands. Next year, an entire Forest City is set to be completed in the Chinese city of Liuzhou, Guangxi province, which comprises of tree-covered houses, hospitals, schools and office blocks over a sprawling 15-million-square-foot site. The site will host 1 million plants.

Stefano Boeri’s Vertical Forest projects are city-focused given that cities are responsible for 70% of the world’s energy consumption and 75% of the carbon dioxide emissions that contribute to climate change. Each Vertical Forest project that he works on is bespoke right down to the very plants and tree species that are specific to each city’s environment.

Speaking at last year’s New York Times Cities of Tomorrow forum, Stefano Boeri said: “A tree in the city, a tree of mature age, alone produces 110 kilos of oxygen each year; and it absorbs hundreds of grams of that invisible poison produced above all by the traffic that enters our lungs every day. But above all, a tree in the city absorbs about 400 kilos of carbon dioxide each year.

“Multiply the number of trees and other plants in the cities of the world, bring living nature not only in the courtyards and along the avenues but even on the facades and roofs of houses, schools, museums, shopping centres, are no longer just gestures of healthy ecology, good intentions of small minorities sensitive to the environment.

“These are necessary choices if we want our cities to become the protagonists of a challenge that every day becomes more difficult, but that is still open: to try, if not to stop, at least to slow the global warming.”

2 thoughts on “Vertical Forests: Integrating plants and trees into urban architecture to improve quality of life and air”